A national flag is a flag that represent a country. The flag can usually be flown by the government and citizens of the country. Both public and private buildings, may fly the national flag. But the national flags are only flown from non-military buildings on certain occasion.
The using of flags begin as military pratices, used as field signs. The flying flags indicate the country of origin outside of the context of warfare arise with the maritime flag, introduced during the age of sail, in the early 17th century. Proper display of national flags is a great deal. The national flag should be flown in the position of honor. There are several rules that indicate the typical of the conventions when the flags are flown on land.
The following flag is the national flag of Myanmar which is displaying yellow, green and red and white star shown at the middle. 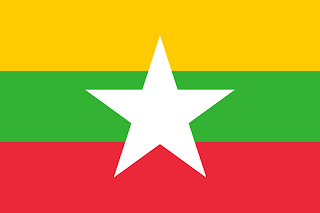 The yellow represents solidarity; the green symbolises peace, tranquility and lush greenery; the red represents courage and determination; and the white star stands for the significance of the union of the country.