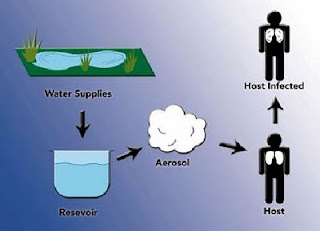 photo : http://www.qcc.nsw.gov.au
What is Legionnaires' Disease?
The first instance of Legionnaire's disease in Thailand was found in 1995, when a British tourist was found infected in Pattaya. Later, in 1999 three Britons were found infected in Chiang Mai and then in 2006, six tourists were found infected in Phuket, Injai Wongrattanasathien said. There has been a significant increase in the number of patients in the North, though the figures cannot be revealed as it would hurt tourism, Injai said.
To control and prevent infections, hotels and business establishments have been urged to keep their airconditioning and water system clean, and for people - especially the elderly and smokers - to wear facemasks when entering contaminated sites.
The symptoms of Legionnaire's disease are similar to flu, though the patient could die from severe lung infection within three weeks if treatment is not sought right away, he said.
source : http://www.thaivisa.com
By Unknown - July 22, 2010