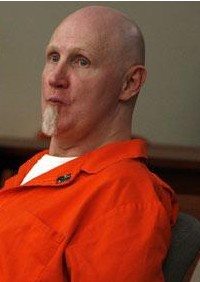 Convicted killer Ronnie Lee Gardner was executed early Friday by firing squad, the Utah Department of Corrections said.
Gardner, 49, is only the third person in 33 years to die by firing squad in the United States.
He was killed at 12:20 a.m. MST (2:20 a.m. ET), a Corrections Department spokesman said.
The execution came after Gardner's last-ditch efforts to save himself had failed.
By Unknown - June 18, 2010