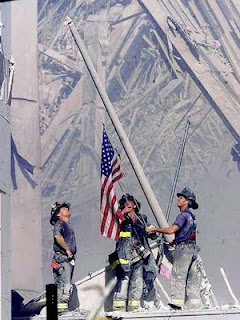 The sky isn't coloring blue as before as it was siezed by fading layer of smoke and dusts. Buses and trains are running with deserted seats . It looks like the city was just woke up from the nightmare. This is scene of early Wednesday morning 12/09/2001.

At the same time in the morning of Tuesday, the city was started with the beautiful melodies and smiles. Sky-high buildings were proudly stands with the background of beautiful sky. The stream of various types of vehicle are flowing on the road.People were preparing to start a day as they have no idea what will happen in the next few hours.

All the melodies and smiles were badly disrupted by devil's scream. The beautiful sky suddenly turned it's color into dark, several buildings and ground was shaken when the huge planes crashed into the 1 World Trade Center (North Tower), it's the time of 8:46 AM, September 11 2001.

On that morning at 8:46 AM, American Airline Flight 11 was crashed into the North Tower of the WTC. Later at 9:03 AM, World Trade Center's South Tower was hit by United Airlines Flight 175. Pentagon was also hit at 9:37 AM by American Airlines Flight 77. Flight 93 or United Airlines which seemed to target the United States Capitol or White House, crashed near Shanksville, Pennsylvania at 10:03 AM, after the passengers tried to retake the aircraft from hijackers.

According to United 93's blackbox recordings, the crew and passengers tried to take control of the plane after learning about the crashings through the phone calls.
Soon after, the plane was crashed into a field near Shanksville in Stonycreek Township, Somerset County, Pennsylvania at 10:03:11 AM.

Later in the interview with Yosri Fouda, an organiser of the attackes, mentioned the target of United 93 was the United State Capitol, code name "the Faculty of Law" as given.

Due to the attacks, Three Buildings, North Tower (1 WTC), South Tower (2 WTC) and  7 WTC, were collapsed. During the North Tower collapsed, debris heavily damaged the nearby
7 World Trade Center(7 WTC). The build later collapsed in the evening at 5:20 PM.

There were a total of 2,993 deaths including citizens from 19 hijackers, 246 on four planes, 2,603 in New York City in the towers and on the ground, and 125 at the Pentagon.
Citizens from more than 99 countries were killed in the attacks. An additional 24 people listed as missing. All of deaths were cilivians except for 55 military personnel at the Pentagon.
Estimated about 17,400 people were in the buildings at the time of attacks. The people below the impact zone safely evacuated the buildings, alongs with 18 peoples from south tower.
At lease 200 people jumped from the burning towers to their deaths.
411 emergency forces were died as they attempted to rescue people and fight fires.
341 firefighters from FDNY (New York City Fire Department) and 2 FDNY paramedics.

Email ThisBlogThis!Share to TwitterShare to FacebookShare to Pinterest
Labels: Anniversary