Land of Smiles with lack of law enforcement. 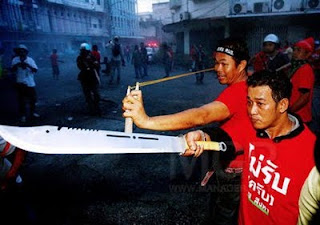 Yesterday, Saturday September 12, PM Abhisit was welcomed by the bags of fermented fish and a barrage of shoes thrown by red shirt protesters while he was in Lop Buri province to hold a meeting with acting police chief.
The protesters managed to break through the police line of 500 policemen and soldiers and confronted the motorcade of country’s premier and officials.
In another story, the airport authorities also still can’t take control the illegal activities from the Suvanabhumi Airport.
According to Bangkok Post, there are 20 powerful gangs operating at the airport which are under the command of major gangs such as Kamnan Samruay, Boonruang Srisang, Sak Pakphanang and Pirap.
They are engaging the underground businesses like foreign exchange services, ticketing, illegal taxi and tour guide services and , also taking “protection fees” from the smaller gangs.
They were used to work at Don Muang Airport, later at the new Suvanabhumi Airport, and they are still at large.
“In Democracy, you have a right to shout out loud, but not in violent and unlawful way.”