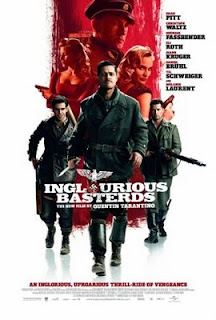 World War II movie Inglourious Basterds, starring Brad Pitt, has entered the North American box office chart at number one. It hit $37.6m (?22.2m) only in its opening week.
It is a 2009 revenge war film written and directed by Quentin Tarantino and released in August 2009 by The Weinstein Company and Universal Pictures. The title was inspired by Italian director Enzo Castellari's 1978 film The Inglorious Bastards, but it is not a remake of that film.

You can watch this movie online at Watch Movie Links

Email ThisBlogThis!Share to TwitterShare to FacebookShare to Pinterest
Labels: Movies