This post is dedicated to Htoo Ein Thin, one of the Myanmar's greatest vocalists and composers. He passed away on 14 August 2004 at the age of 41. 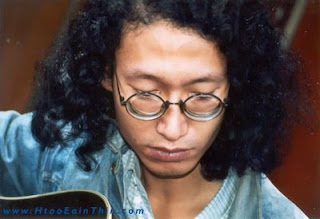 Htoo Ein Thin was born in Pathein in the Irrawaddy delta to a Bamar father (Tun Myint) and a Mon mother (Mya Yin). His Birthname was Kyaw Myint Lwin. He attended Pathein Regional College, and graduated with a degree in botany from Mawlamyaing University in 1984. After graduation, he studied formal music education under a well known music instructor Aung Soe (KC Francis). Htoo Ein Thin played the guitar, the piano, the harmonica and the drums.

He is widely remembered for his heart-felt songs with his own original music and lyrics. Being an "original" songwriter means a lot in Myanmar. When he released his first album Naryi Baw Mha Myet-Yay Zet Mya (Tears on the Clock) in 1986, the Burmese pop music scene was (and still to a lesser extent is) dominated by Burmese covers of Western pop and country music--known locally as "copies".

To be sure, Htoo Ein Thin's musical style was heavily influenced by Western jazz, rock-and-roll and pop music. Some critics complained that his sound was still too "derivative" or "emulative", comparing his compositions and arrangements to those of the Bee Gees or the Beatles. But it was his ability to bring Burmese soulfulness (some would say wailing quality) to his lyrics and combine it with Western-fused arrangements that proved ever so popular with generations of Burmese--male and female alike. His style was unique, even compared to that of other contemporary singer-songwriters like Soe Lwin Lwin and Kaiser. Htoo Ein Thin's lyrics and arrangements are arguably less edgy than Soe Lwin Lwin's and more sophisticated than Kaiser's.

Like most Burmese songs, many of his songs are about love and heart-ache, only areas that could safely pass through draconian Burmese media censors, which did not (and still don't) tolerate even a hint of social commentary. His 1991 ode "Yazawin Mya Ye Thado-Thami" (The Bride of History) raised a few eye brows. Although the song ostensibly is about Myanmar's main artery Irrawaddy river, many took it to be as an implicit reference to Aung San Suu Kyi. He was banned from performing the song in his concerts.

Within the confines of Burmese censors, one topic he wrote extensively about was the mother's love, the relationship between the mother and the son, and a son's regrets. He devoted an entire album A-May (Mother) to this topic. The song "A-May Ein" (Mother's House) continues to resonate deeply with many Burmese home and especially, abroad.

His success with Naryi was followed by a string of successful albums, culminating in Atta Bon Saung Khe Mya, and Akyinna Einmet, both released in 1991. His songs from this early era are still very popular today. In particular, "Mei-Lai-Taw" (Just Forget It), "Min-Ma-Shi-De-Nauk" (Since You've Been Gone) and "Hsway-De" (Missing You) remain standards to this day. His success waned in later albums though he remained popular. He even resorted to covering a few Western songs--something that did not sit well with some of his purist fans. His last albums--in particular the posthumous Chit-Chin Ah-Phyint (With Love)--saw a return to his musical roots that captivated generations of Burmese.

He was survived by his wife, Thwè Thwè Htwe, and daughter, Mi Kun Htaw when he died.

the great songs..for my life...