Boy's dreams were ruined by the rule of ministry. 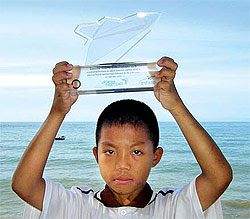 "Every child has the freedom and the right to education. Refusing to grant him Thai nationality is understandable, but denying him educational opportunities is unacceptable," said law lecturer Phunthip Kanchanachittra Saisoonthorn of Thammasat University.

Mong Thongdee, 12 years old paper airplane champion, may miss the chance to represent Thailand at an international competition to be held in Chiba, Japan, on Sept 19-20.

Child of Burmese construction workers in Chiang Mai, Mong is a stateless child, which means he cannot have a passport or a chance to travel overseas.

He is a Prathom 4 student from Ban Huay Sai school in Chiang Mai's Muang district, was a winner of last year's national paper airplane contest, organised by the National Metal and Materials Technology Centre(Mtec) in Bangkok.

His paper airplane stayed in air for 12.50 seconds - the longest in his age category, under-12 category, qualifying him as the country's representative at a paper airplane competition to be held in Japan.

But he may miss a chance to attend the bi-annual "oriplane" contest due to his nationality problem.

"I love to fold paper airplanes, and I will continue to do so even if I cannot go to Japan" said Mong during the phone interview with Bangkok Post.

"Officials told us that allowing a stateless person to leave the country will be a treat to national security. But this boy won't harm anybody. He will only make us proud." he said.
MTEC has to submit the names of the Thai contestants no later than next week. If Mong cannot make it, MTEC will send his runner-up, Attawut Aimwantana instead.

Interior Ministry spokesman said on Friday that Minister had told the officials to find ways to help the boy.

However, Mr Supachai Jaisamut, ruled out the possibility of giving the boy Thai citizenship, because he was born to migrant workers.

reference : BangkokPost : bangkokpost.com
Thank you very much for your valuable visit.
regards,
lynnnay@2009
By Unknown - August 30, 2009